Winter 2013
On Guns, Religion and Freedom 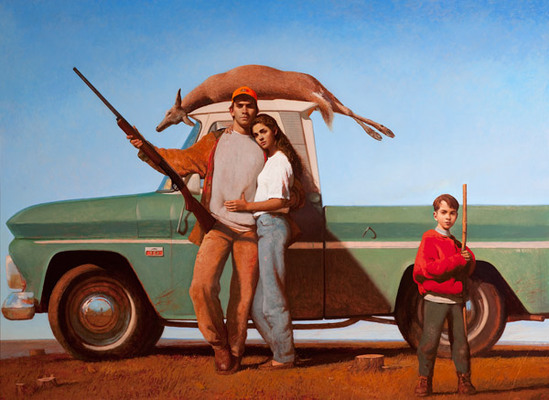 Young Life, 1994 Guns are stupid. They are designed for one purpose, to kill.
As a society, we must address anew the issue of gun control.
The Second Amendment of the Constitution written in 1791 guarantees …“the right of the people to keep and bear Arms…” (a well regulated Militia, being necessary to the security of a free State)* In 2008 and again in 2010, The Supreme Court issued decisions that guaranteed individuals the right to possess a firearm regardless of whether or not they were associated with a ‘militia’.
There is one important question we need to ask in light of the mass killings in schools, theaters, and malls in America. Is the Constitution a ‘living’ document or is it a ‘dead’ document? Obviously, I am not a legal scholar, but it seems to me that either way one chooses to answer this question, changes in the current gun laws under the Constitution could still be enacted.
If we choose to say that the Constitution is a ‘living’ document, open to interpretation and reinterpretation as each new technology confronts us with moral and societal dilemmas, then, we should re-address whether it is best for the whole system if we are allowing guns to be purchased and toted by anyone who can obtain one legally or otherwise. Data reveals that we are not ‘safer’ when everyone has the right to possess a firearm.* And, if we are guaranteed “life, liberty and the pursuit of happiness”, then any amendment which hinders this promise is at odds with the greater goals of the Constitution and needs to be changed.
If we choose to consider the Constitution a ‘dead’ document, meaning that we can not change it one iota, it should remain as written, serving us as it has for over 200 hears, then we should adhere strictly to the words of the document, and the definition of those words at the time the document was written. This interpretation would allow citizens to own ‘arms’ as they were defined in 1791, ie. individuals would have the right to own and bear a musket.
We must find a way to resolve these dangers within our society. We can re-define what is considered a firearm. This seems like a logical solution. Under current law, we are allowed to own semi-automatic weapons. Are we also allowed to own Bazookas? Tanks? If it is impossible to change the Second Amendment, then we should pass laws insisting on extremely high tariffs for the purchase of ammunition. As seen in Michael Moore's Bowling for Columbine Chris Rock offers a solution, "bullet control," he jokes, if each bullet cost five thousand dollars, people would think twice before purchasing, aiming and shooting.
Perhaps we could encourage lawmakers in progressive states to begin to introduce legislation, which would challenge state and national laws regarding the standing definition of ‘arms’. Without a doubt, the NRA is a stumbling block in the way of any movement forward toward sensible gun control. Lobbyists will continue to back the Congressmen who support lax control of guns. But, the Congressmen/women ultimately answer to the American people.
(From the 1990 election cycle through August 2010, the following political contributions were made by gun rights and gun control interest groups to federal candidates: $19,195,400 was donated to Republican candidates to support gun rights. While $3,231,405 was given to Democratic candidates to support gun rights. Over 85% of the pro-gun donations went to Republicans. Whereas gun control groups gave $1,776,310 to Democratic candidates and $112,326 to Republican candidates over the same time period. 94% of gun control money was donated to Democratic candidates on a national level.) *
Jim Wallis, the DC pastor, and activist, has said that politicians are just finger lickers, with their fingers held up in the air, waiting to see which way the wind blows. We are the wind. It is time for religious communities to face the realities of gun violence in America, and take a stand. Wallis' Sojourners site has a petition where people of faith can take a stand against gun violence.
A larger conversation needs to begin in churches and synagogues. It will not be easy. We can't demonize the other and hold tightly to our worn-out beliefs. Certainly, religious communities, as with the public at large, are split, left and right. During the 2008 presidential campaign, Barack Obama famously said that in hard times people tend to cling to their guns and their religion.

I think that if we are going to make any appreciable change, we are going to have to try to speak one another's language. And it is in that spirit that I offer this nugget. In this particular case, The Sixth Commandment, "Thou shalt not kill", should trump the Second Amendment, "the right to bear arms". In a civilized society, an order must prevail. We must look deeply into our souls to find a solution. Fear must give way to a greater courage. I am not calling us to stick our heads in the sand. All across this country, Americans of every creed and color, in every city and town, are law-abiding; kids go to school, parents go to work, they play together, they have dinner together and they lead happy lives. This isn't a dramatic storyline, it won't sell newspapers or keep us glued to the TV. But, percentage-wise, most of America is safe. Beautiful events happen every day, in plays on stages, in games on fields, in tests in labs and in creative acts in studios. The violence is an anomaly. One dysfunctional character lashes out and the news reports it and we all live in fear. Millions of upstanding, striving, hard-working people vs. one wack-job and we all live in fear. 85% of Americans support stricter background checks for gun purchases.* Thanks to our moral codes, our laws, our government, and our conscience, we are apart of a civilized society. If that society is to continue to grow and prosper, we must continue to evolve. As new technologies of destruction are manufactured, we must take a stand to keep them out of the hands of unhinged individuals. We must put limits on entertainment and gaming that glorify violence. This is a capitalistic culture. If we don't buy it, they won't make it. This is true with games, movies, and guns. If we are to "be the change" we want to see in the world. It must start with what we watch, read, buy, and pay attention to.
In the end, it really comes down to basic struggles with our concepts of Freedom. Can we reconcile individual rights being sacrificed for the safety of the greater whole? In this case, some common sense solutions need to prevail. If it were up to me, all guns would be illegal in America ( the majority of police and police departments would agree). But, short of this solution... if Congress can enact common-sense policies, such as assault weapons bans, then we will be on our way to a safer America. I encourage you to contact your elected officials* and let them know your thoughts. Don't let up.
Bo