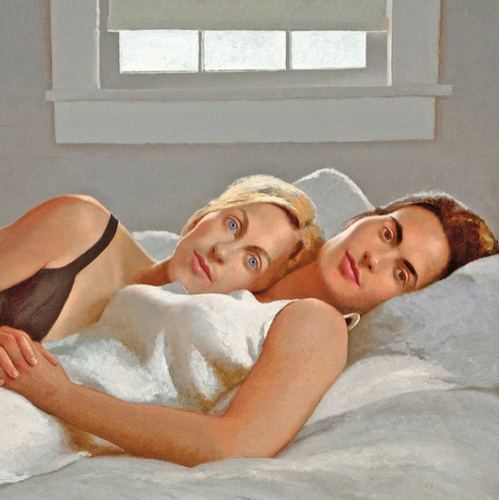 Outside This Room, There is War and Terror
24 x 36, oil on birch panel, 2013
Happy to report that our film, 'SEE' is out on DVD and can be ordered here. It continues to be screened at museums and theaters, check the website to see if it'll be playing near you.
We've been busy in and out of the studio. My last body of work created quite a stir. Truth is, it is hard to categorize the paintings. But, many who have viewed them in person have been deeply moved. This means a lot to me. The paintings are meant to address the exact issues of misogyny and violence which have been in the news lately. I painted them as an antidote to the rampant guns and violence which have become such a disease in our society. I asked myself, what would the opposite of 'all that machismo blasting out of the neighborhood multiplex' look like? The paintings may raise more questions than they answer, but art is meant to prod, to wake us up. My next series takes on a safer subject, religion.
Living in the South provides ample opportunity to explore all facets of religion and culture. It is richly textured down here. When HB60 passed the Georgia House and was signed by Governor Nathan Deal, we quickly went about designing our 'no guns' stickers, to be handed out to local restaurants and bars.

We've contacted the local churches to inquire about their gun policies. The law, which goes into effect July 1st, essentially states that guns will be allowed everywhere (except the State Legislature, schools and beyond the security lines at airports). The hope is that with enough community support, we can effectively override the new law. If local businesses will post signs declaring that guns are not allowed, then patrons will not have to be concerned about who is and who is not 'packing'. We are framing it as a 'health issue'. It is similar to when cigarettes became a health issue instead of a lifestyle choice, and when drinking and driving became a public safety issue. It is a trans-partisan problem. It goes beyond a right or left political discussion, the issue is a holistic dilemma, personal freedoms vs what is best for the whole society. To secure the safety and well-being of the most number of people, some folks will have to leave their guns home. It's not the WildWest, we are a civilized society. There may be a place for guns on the military bases, or in the hands of hunters in the woods and fields, but there is no place for guns on our streets (or in our churches, restaurants, and bars).
All in all, Life is good. We are doing the best work we know-how. Trying to make small differences where we can. A bare walls gala is being planned for the Fall at CSU when an opening date is scheduled to be announced for The Bo Bartlett Center. Stay tuned.
Hope you have a great Summer.
Happy Painting!
Bo