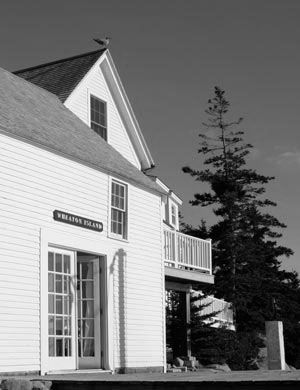 I am sitting on the new deck on my small studio overlooking the harbour of Matinicus. John Mitchell’s boat, Miss Mia, is hauled up on dry land alongside his dock while he does some work on it. The tide is coming back in now and he is waiting for his boat to be waterbound again. Autumn comes quietly to Matinicus harbour. The harbour bell tolls gently. Waves crash into the distant rocky outcrop along Old Cove. Stephen, Ronnie Ames’ grandson comes in from haul. If we are lucky and he’s had a good morning, he’ll skiff over and put some shedders in our lobster box.
The big news of the Summer was that I gave Betsy ‘running water on Wheaton’ for her birthday. I’d lived out here for ten years with just a hand pump at the well, my theory being, ‘the fewer things with movable parts, the fewer things that will break’. But, Betsy also received a “Ladyship” for her birthday, so she is now officially “Lady Betsy Eby”, and a lady can’t hand pump. If I’d known what a production getting water on an island in the middle of the North Atlantic would be, then I’m certain I would have given more modest gifts. After a very expensive propane generator, a new shingled generator house, new solar panel to keep the generator battery charged, conduit, cables and pipes and storage tanks and filters and a sink and drainage; we now can, with a twist of a faucet, have tap water in our kitchen. Ah, the convenience…until it breaks.
I’m reading David C. Korten’s book The Great Turning. In it he quotes Einstein, “A human being is a apart of the whole called by us ‘Universe’ a part limited in time and space. He experiences himself, his thoughts and feelings as something separated from the rest, a kind of optical delusion of his consciousness. This delusion is a kind of prison for us, restricting us to our personal desires and to affection for a few persons nearest to us. Our task must be to free ourselves from this prison by widening our circle of compassion to embrace all living creatures and the whole of nature in its beauty.” Korten writes, “The golden rule of ‘Earth Community’ is “Do unto your neighbor as you would have your neighbor do unto you as you work together to create a better life for all”. Service, compassion, and cooperation are valued as essential social goods and considered a measure of healthy maturity. If each individual has the opportunity to experience the intrinsic rewards that come from responsible service and shares in the benefits of the growing generative power of the whole, then trust, compassion, and cooperation become self-reinforcing. Conflict can be embraced as an opportunity for creative learning. It becomes natural to expand the circle of cooperation in anticipation of the increasing opportunities for mutual gain that expanded cooperation makes possible.” Viktor Frankl said, “ Man does not simply exist but always decides what his existence will be, what he will become in the next moment.”
Thanks to many of your donations. The Matinicus Store did get up and running this year. Plans are underway to open the Post Office soon in the Parsonage. Matinicus is an island without a government or a police department. There are several wonderful EMT’s , a volunteer Fire Department, several elected assessors. When there is a problem, people show up at the assessors meeting on Thursday afternoons (after they come in from hauling lobster) and talk about it.
This Fall brings the presidential elections. David Korten draws distinctions between two very different ways of being, in a chart that he labels “the Choice’. On one side is “Empire” and on the other “Earth Community”. Under Empire he includes these traits, Life is hostile, Humans are flawed and dangerous, Order by dominator hierarchy, Compete or die, Love Power, Defend the rights of Self. Under “Earth Community” he lists, Life is supportive and cooperative, Humans have many possibilities, Order through Partnership, Cooperate and Live, Love Life, Defend the rights of All. Surely, we have a choice this Fall.
The harbour is quiet again and I can hear a soft voice from the radio wafting through the open door of Betsy’s studio. She is listening to Garison Keillor's “Prairie Home Companion”, special guest Martin Sheen is singing, his voice quivers. John Mitchell has completed work on his boat and he has moored it safely again in the harbour. Stephen, young and fresh, brings lobsters over to us, he calls out from his small boat, ”How many do you want?”
All is well.
“My life goes on in endless song
Above earth's lamentations,
I hear the real, though far-off hymn
That hails a new creation.
Through all the tumult and the strife
I hear it's music ringing,
It sounds an echo in my soul.
How can I keep from singing.
While though the tempest loudly roars,
I hear the truth, it liveth.
And though the darkness 'round me close,
Songs in the night it giveth.
No storm can shake my inmost calm,
While to that rock I'm clinging.
Since love is lord of heaven and earth
How can I keep from singing?”
Bo